Since I want to learn more about Linux  Device Driver development I need to learn more how the OS work from scratch. There are many tutorials about the Linux kernel, but they are often too heavy. I need a guide that show me in small steps how to set things up. There is a one great tutorial:  The little book about OS development. I am really happy that the authors put up all the effort to write this and publish it for free! It is not Linux but it is still based on the same problems that most OS has to deal with during boot up.

Note that it is a bit “old school”, some techniques are not well suited for developing a real OS, how ever if you like me want to get a better understanding of multitasking, virtual memory IRQ and such it is perfect. IF you plan to make a real OS you should read beginners mistakes at the Osdev wiki, quite a lot of these faults are in the little book. Another thing to keep in mind is that most links are outdated, I found this tutorial to be very well written (down to explaining the chip architecture!)

I am a big fan of virtualbox so I decided to update the tutorial with how to use it instead of the brosh emulator that is used in the book.

You could either develop directly on a Linux host. This will save you time. However I’m on a windows host and I will use a Linux Guest to develop on. If you use Linux as a host you can skip the part about exporting the iso-file.

Let’s follow until the first step of the book: hello CAFEBABE

We need to create a guest OS that will run the compiled OS. Let’s call it guest C (as Compiled or CAFEBABE). You can optionally develop from a guest Linux OS. If you are on a host Linux this is not needed. Let’s call this OS guest L.

Let’s make an export script*. Create a file create_iso. Add the gensioimage command and copy the iso to the shared folder:

This is a very simple script. You should probably add some error handling if an iso couldn’t be created.

*In later chapters we will use a make file. I suggest to add the cp line in that make file:

Running the guest and debugging

Once you got the iso (if you exported from guest L it will be in osdev folder on your host) you can add it to an optic drive on your C guest. Running it is not very fun, since you can’t see any registers – we need to enable debugging.

By default debugging is disabled, see the manual. There are a couple of options to enable it. For Linux it is quite easy since it is a command line friendly OS. If you use Windows as host the easiest will be the following option (quoted from the manual):

In Windows this is done by opening a command promt and entering the following:

It is paused by default, so press ctrl  p. You will see info that the kernel is loaded. To see the 32 bit registers use the debug command: rg32: 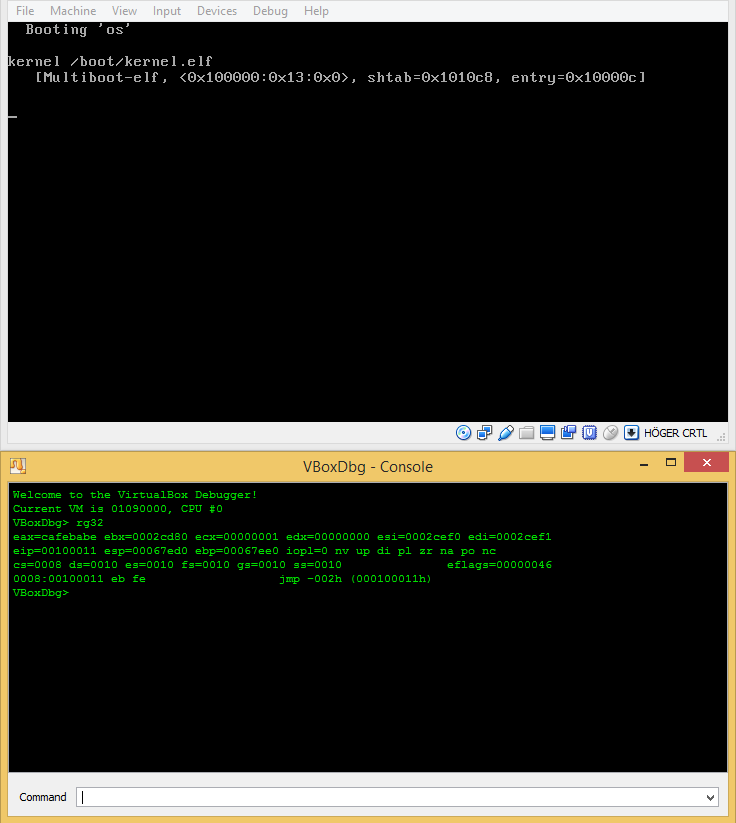 As you can see there’s a CAFEBABE in eax.