Today after upgrading Virtualbox on my Arch host I found that I could no longer run Virtualbox.

$ virtualbox
WARNING: The vboxdrv kernel module is not loaded. Either there is no module
available for the current kernel (4.4.3-1-ARCH) or it failed to
load. Please recompile the kernel module and install it by

You will not be able to start VMs until this problem is fixed.

As told I could not boot any of my VMs.

It was not possilbe to run sudo /sbin/rcvboxdrv setup, all I got was another error message:

After banging my head and reinstalling Virtualbox I found out that the problem is that virtualbox-host-modules package were simple removed. I suspect the dependency became broken when installing either the new arch kernel or the new Virtualbox package.

You will need to manually load the modules the first time:

A while ago I stumbled upon a post about the difference between distros. One user explained Arch as:

“It is a practical joke. You follow the instructions on the wiki, and it just says at the end: congrats and thanks for playing. try again for a better score.”

I had tried a few Ubuntu forks and even CentOS at that time, but still I could not understand the post. Apparently the Linux vets in the thread thought it was an incredible funny joke but I was left clueless.

Until today. I decided to find out what this Arch Linux is all about. I made up my mind to install it and to make it more interesting I would not give up until I had:

Downloading Arch and setting up virtualbox was as easy as all other distros I’ve tried. Enabling EFI is just checking the box under motherboard at virtualbox. After a few minutes I was already booting and I would soon be a few clicks away from installing Arch.

But wait a minute… isn’t there something missing from the menu?

Where is the install option?

Starting Arch Linux archiso just boot you into a Console. What am I supposed to do from here? Not even my keyboard layout is correct.

The first hits on google for “install arch” takes you to the Arch wiki. While even the beginners guide is a few pages long, it is excellent written for an inexperienced Linux user like me. I don’t think I ever learned so much about Linux in a single day as when I tried to make my boot partition (Wait, what, so my drive is just a file? Aaaaah!).

With that said I got a bit terrified when I even had to load my keyboard settings. And that was not so easy, doing like the wiki said “loadkeys <country code>” did not work, but after a while I found out that the correct usage (for swedish) is #loadkeys i386/qwerty/se-lat6.map.gz

“Arch Linux, a lightweight and flexible Linux® distribution that tries to Keep It Simple.”

That ‘simple’ stings in my pride every time I have to check the wiki.

Level 3 – Let’s get this parted started

As this was the first time I did partitioning it did take me a while to understand how to set up a UEFI boot partition. But this is one of the reason why I love VM: I am quite ruthless to my poor computer and I rather try what I think is right than keep reading. This often makes me learn faster – however you don’t really want to do this when you are partitioning your HD. At least not if you have another OS installed like me. With VM I don’t need to care.
I might write in another post how to set up a UEFI boot with virtualbox, it had some other nice effects like increased screen resolution in console mode. The trick is to create a partition with GPT and fat32.

After mounting and chroot ( another new concept I learned today) you do a pacstrap. pacstrap basically downloads Linux to your newly set up partitions. What impress me is that with the -i options you can even choose what packages you want to include, Arch is really flexible! Then time to reboot. Linux finally!

>You are now being dropped into an emergency shell

Ok, perhaps not yet. But after a few more hours I accomplished my first goal.

I like lightweight desktops so I decided I’d try xfce. First you had to install xorg-server and some vesa drivers (since I’m on virtualbox I had to use a generic driver). However trying to start the desktop just generated the error “Can’t find any screens”.

I got a bit worried that it would not be possible to load xfce with generic drivers, but as I troubleshooting I finally found the error: failed to load module vboxvideo. Well of course, I hadn’t installed the guest additions! Installing the guest additions was a bit different than for Ubuntu, but just as easy.  Finally the desktop starts… I made it! I beat the game! Or…? 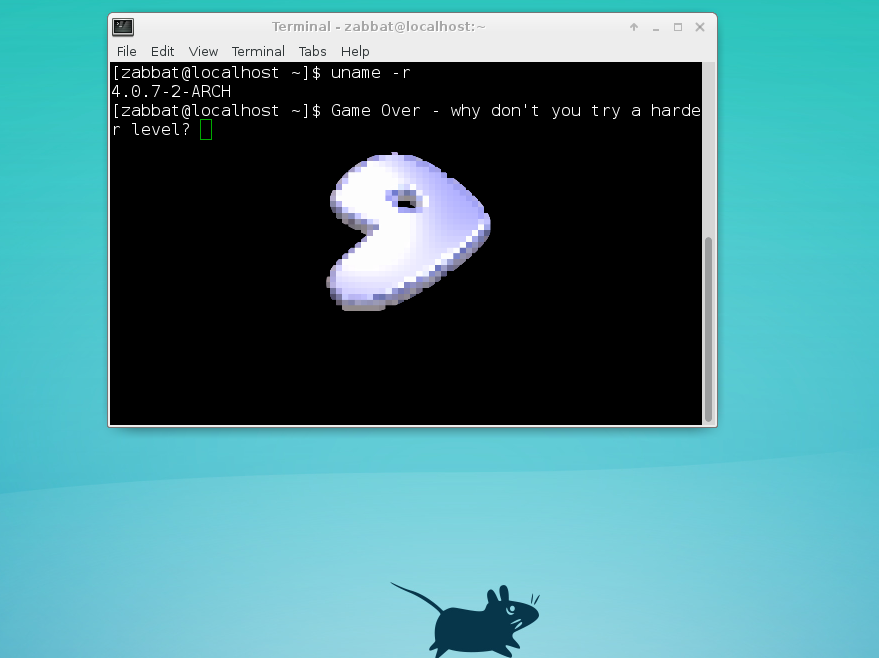 I recommend everyone who have been using Linux as desktop for a year or two to install Arch. You will learn a lot about Linux that I think is very difficult to do without practical experience. And it is fun! Well, like all games you do get tired of it after the first few runs, but right now there’s many more things to explore.